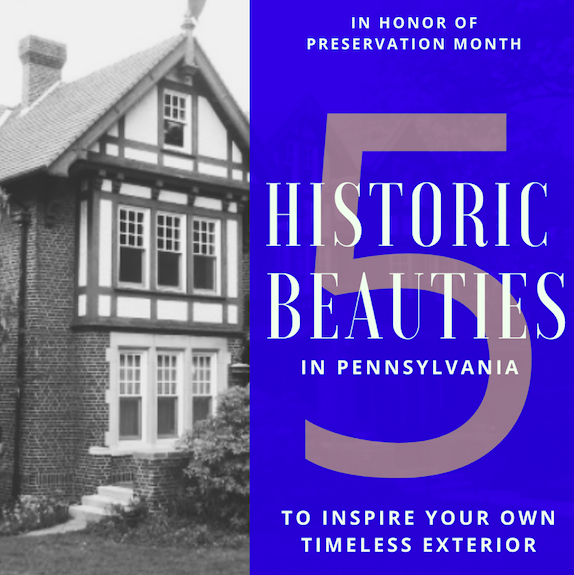 It’s December of 1777, and George Washington’s small army is on the march towards Valley Forge.

The temperature hadn’t yet dropped to the lows later experienced in Valley Forge, but that wasn’t to say the weather wasn’t brutal in Pennsylvania on this day in history.

After an unexpected skirmish led to a full out battle at Matson’s Ford, the Continental army began to build a makeshift bridge across the Schuylkill river. The outnumbered American’s knew that fleeing was the only way to live.

After crossing the river, the makeshift bridge of roped-together wagons was destroyed- guaranteeing the Continental army wasn’t followed.

You Weren’t Expecting A History Lesson from A Construction Article…Were You?

Named after the famous river that saved George Washington and his small army, Schuylkill County has a wealth of history.

Which also means: plentiful- and gorgeous- historic structures to match.

It’s Preservation Month- and in honor of the many historic homes we’ve had the pleasure of protecting over our decades in Schuylkill, I’d like to take a moment and reflect on the structures still standing today in our county that give us a lens through which to appreciate our heritage.

And how you can capture some of the same timeless elegance, style, and durability as a homeowner yourself.

Ready for some beautiful historic inspiration? Let’s dive in.

Historic Preservation: Keeping The Past Alive

Preservation is crucial for historic buildings. Without the dedication and celebration of these homes, we would not have a glimpse into the times and cultures of the past.

Schuylkill County is home to two historic districts: one in Pottsville and one in Tamaqua. But historic homes abound all throughout the county, each a spectacular display of architecture worth visiting.

If you’re fortunate enough to own or live in a historic home, you know that upkeep is part of being a good steward of history. It’s worth noting that historic homes are rising in popularity- as younger homeowners askew new-builds in favor of the flavor and individuality found only in historic builds.

Today we’re going to look at five historic homes in Schuylkill County. We’ll talk about their history and their architecture.

But most important, we’ll look at what features added to their durability, and the amazing preservation work that’s protected these buildings from decay. Considering an exterior update for your home? You’re in for some great insight into how you can leverage the lessons of the past to create a home worthy of passing down. 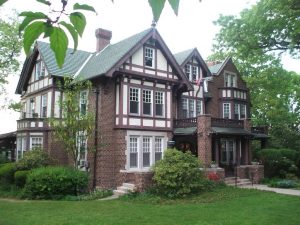 Once home to the heir of America’s oldest brewery, now the Yuengling mansion serves as the meeting place for the Schuylkill County Council for the Arts.

Constructed in 1913, the mansion was home of Frank D Yuengling, and his wife, Augusta. Frank was the heir and manager of the D. G. Yuengling and Son Brewery. Founded in 1829, the brewery is considered to be the oldest brewery in America. After his father’s death, Frank began construction on this beautiful mansion: a home that would reflect his family’s heritage.

In 1912, construction started on the three-story home, located in Pottsville, PA. The Tudor style home was designed by architect Harry Maurer, complete with Jacobethan accents, and dramatic flourishes.

Everything about the mansion is exquisite. From it’s hand carved fireplace to the massive foyer extending all the way to the back of the house- it’s an architectural work of art.

But the most impressive feature of the mansion? The home’s facade.

The house features a side and rear porch, and a front portico as an homage to Greek architecture. Both brick and timber make up the facade of the home, complete with dramatic overhanging balconies.

This mixed Tudor-style facade is a timeless classic still reflected in family homes across the county. Take Bob & Karen’s home (featured here)– a modest but still incredible nod to this prominent architectural style. 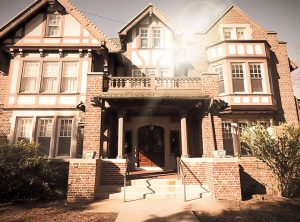 Here’s an interesting note: Built with 20 rooms, space wasn’t an issue for the mansion. However, the architectural design features gable dormers, a style which wouldn’t grow in popularity until the 1950’s! This mansion was ahead of its time!

(Want to learn more about dormers and how they increase space? Read about them here in our Quick Guide to Dormers.)

Restoration on the Yuengling Mansion

The mansion has regained attention in recent months. Restoration work began in January of 2021 when the Schuylkill County Council for the Art’s received an anonymous donation of $50,000. The organization hopes to match the amount through public donations.

“I want to keep it so that it’s a beautiful living dedication to what the Yuengling family has provided to this area,” says executive director Emily Ehlinger Kraft.

It’s amazing to see how the Frank D Yuengling mansion still serves to unite and better the community today, over a hundred years since it’s construction.

And it’s architecture? It’s proof that you can’t go wrong with a classic. If you’re considering a new build in Schuylkill County, historic architectural inspiration abounds!

Rich in both history and controversy, the Partridge house might the oldest gothic revival style home in America.

However, the house’s timeline is largely debated- and it’s construction date is unknown.

Gothic revival became popular in England in the early 1700’s, with the trend crossing the ocean into America shortly after. How can you identify the gothic style? Look for medieval features such as:

The Partridge house showcases all of these in it’s design.

Vergeboards act like modern sofft, protecting the roof from rot and decay. Small details, like soffit, can add years of protection to your home- especially in a rain-heavy area like Pottsville. 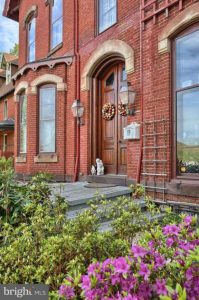 From 2005-2018, the building served as a bed and breakfast. The owners of the building were dedicated to it’s restoration while remaining true to its original style.

The Partridge Home is no longer a bed and breakfast, but you can still drive past the home and marvel at its beautiful architecture.

Is the home really the oldest of its style in America?

There’s really no way to know.

But, if you’re crossing through Pottsville, PA make sure to make a detour and check out this amazing house. The architecture is a wonder worth stopping for. 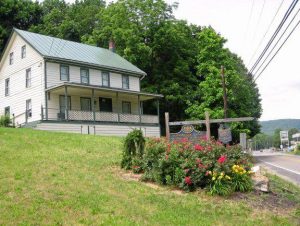 Christian’s grandfather, Christopher Ley, was a renowned captain in the Revolutionary war and responsible for much of the fame and wealth associated with the family.

Christopher Ley had nine children- Michael being the most prominent. Michael built and owned Tulpehocken Manor Plantation and was close friends with President George Washington. The president is rumored to have stayed at the mansion on three different occasions.

It was Michael’s son, Christian Ley Sr who went on to build Nutting Hall.

Not much is known about the building’s history after that point. It was at one point converted into a series of rental apartments. In 1955, Margery Wheeler Mattox decided to buy and restore the building, dedicating 25 years to the project. At 93 years old, Mattox still owns the hall and offers tours of it today.

Nutting Hall is a Federal-style building.

But there’s something different about Nutting Hall:

Metal roofing has grown in popularity in recent years- but has been around in America since as early as 1775.

The current metal roof isn’t original to the house. It’s not recorded if the Hall was originally built with a metal roof, but it very likely was! The Ley family immigrated from Germany where metal roofing was a very popular choice.

Metal roofing is one of the most durable roofing materials available and Nutting Hall is proof that it looks beautiful even on historic homes.

Here at Martin, we love installing metal roofs. If you’re curious about switching to metal, you can read up on it here. 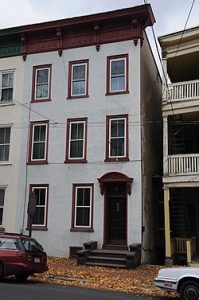 Did you know that Pottsville was childhood home to one of the nation’s most prominent authors, John O’Hara?

His first novel “Appointment in Samarra” takes place in the town of Gibbsville, the fake name he gave to Pottsville. O’Hara was a native to the town, and although the people of Pottsville weren’t a fan of O’Hara at the time, his work did help put the town on the map.

Built in 1870, the Italianate style home has now been converted into apartments. Although the interior has been updated and retrofitted for the apartments, the exterior remains much the same.

The three story tall building is decorated with hand carved ornamental cornice, with bold touches of red along the windows and on the roof.

The smooth stone facade of the house kept the building safe from damage- thanks to its historic preservation. Authentic stone facade can last a lifetime, and the John O’Hara home is a testament to its durability. 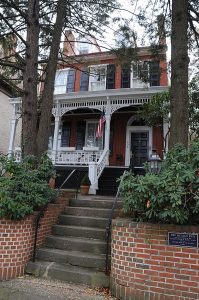 Famous for creating the first furnace to smelt anthracite iron, Burd Patterson made his fortune, built his mansion, and had little to no interaction with anyone else.

As one of Schuylkill County’s most elite and busy business owners, Patterson had a reputation as a “homebody” who preferred his own company over others. With most of his time spent at home, it’s no surprise that the mansion is an architectural marvel.

The building is an amazing brick 2 ½ story mansion, constructed in 1830. The house features an ornate overhang, complete with beautiful columns to support it.

But what sets the mansion apart?

In 1900, the Queen Anne style porch was built on to the house. Maintained throughout the years, the porch is still safe and functional to use, and blends in perfectly with the house.

Oftentimes, homeowners are hesitant to add on to their historic home. When installing a new porch, it’s important to match the porch materials to the rest of the house, so that the new build blends in seamlessly.

Here at Martin, our team is experienced in matching materials and building porches made to last for every home. We’re here to answer any questions you have about adding a deck to your historic home, and help make your dream porch a reality.

We Learn From History

History has taught us so much about construction. We look at buildings of the past and see what’s keeps them standing.

Even more so, we can learn what materials and newer trends compliment and protect historic homes.

Here at Martin, preservation isn’t just for historic buildings. Everything we build is made to last. We work with the highest quality, American made, materials. Your home will one day be a piece of history, and we want it to last for your family for decades to come.

If you’re interested in strengthening your home to stand the test of time, we’re ready to help. Give us a call at 570-345-0406 and get started on protecting your home.

Never miss an article! Keep up with the latest at Martin Roofing and Siding by signing up for our email list here: